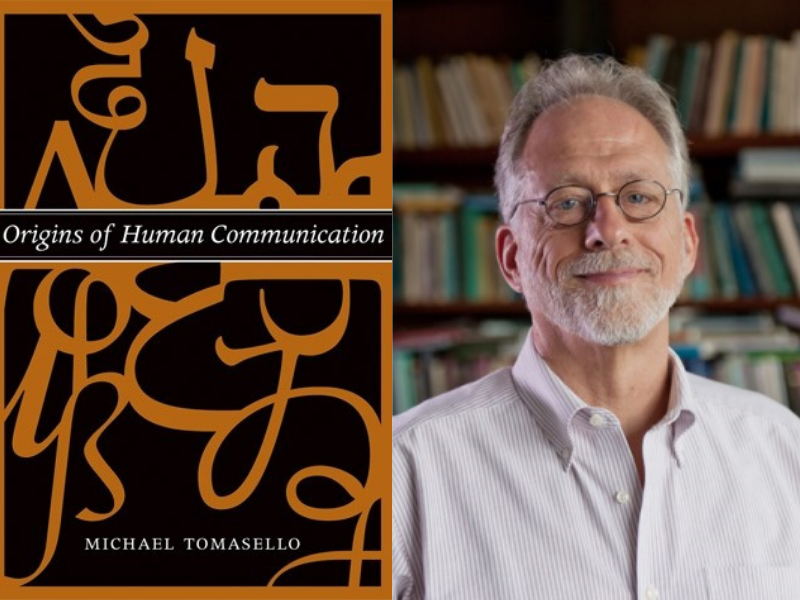 Tomasello argues that human cooperative communication rests on a psychological infrastructure of shared intentionality (joint attention, common ground), evolved originally for collaboration and culture more generally. The basic motives of the infrastructure are helping and sharing: humans communicate to request help, inform others of things helpfully, and share attitudes as a way of bonding within the cultural group. These cooperative motives each created different functional pressures for conventionalizing grammatical constructions. Requesting help in the immediate you-and-me and here-and-now, for example, required very little grammar, but informing and sharing required increasingly complex grammatical devices. Drawing on empirical research into gestural and vocal communication by great apes and human infants (much of it conducted by his own research team), Tomasello argues further that humans’ cooperative communication emerged first in the natural gestures of pointing and pantomiming.

Conventional communication, first gestural and then vocal, evolved only after humans already possessed these natural gestures and their shared intentionality infrastructure along with skills of cultural learning for creating and passing along jointly understood communicative conventions. Challenging the Chomskian view that linguistic knowledge is innate, Tomasello proposes instead that the most fundamental aspects of uniquely human communication are biological adaptations for cooperative social interaction in general and that the purely linguistic dimensions of human communication are cultural conventions and constructions created by and passed along within particular cultural groups.

Michael Tomasello (born January 18, 1950) is an American developmental and comparative psychologist, as well as a linguist. He is professor of psychology at Duke University.  Earning many prizes and awards from the end of the 1990s onward, he is considered one of today’s most authoritative developmental and comparative psychologists. He is “one of the few scientists worldwide who is acknowledged as an expert in multiple disciplines”.

His “pioneering research on the origins of social cognition has led to revolutionary insights in both developmental psychology and primate cognition.  He was a professor of psychology and anthropology at Emory University in Atlanta, Georgia, US, during the 1980s and 1990s.

Subsequently, he moved to Germany to become co-director of Max Planck Institute for Evolutionary Anthropology in Leipzig, and later also honorary professor at University of Leipzig and co-director of the Wolfgang Kohler Primate Research Center.

2016 he became Professor of Psychology and Neuroscience, Duke University, where he now is James F. Bonk Distinguished Professor. He works on child language acquisition as a crucially important aspect of the enculturation process. He is a critic of Noam Chomsky’s universal grammar, rejecting the idea of an innate universal grammar and instead proposing a functional theory of language development (sometimes called the social-pragmatic theory of language acquisition or usage-based approach to language acquisition) in which children learn linguistic structures through intention-reading and pattern-finding in their discourse interactions with others.

We can have all the means of communication in the world, but nothing, absolutely nothing, replaces the gaze of the human being.
Paulo Coelho
Share this post