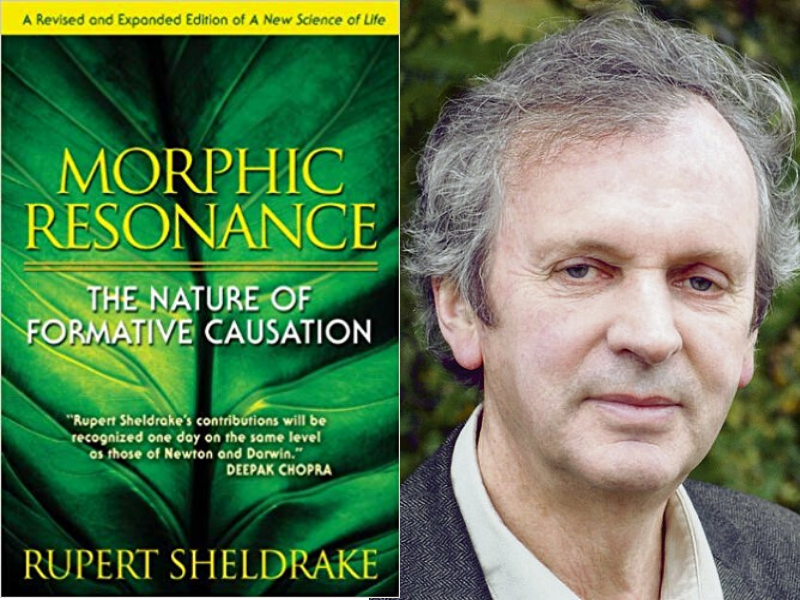 Rupert Sheldrake, British biologist and essayist, in his writings: A New Science of Life (1981) and The Presence of the Past (1988), elaborates the theory of morphogenetic fields: invisible forces present in a system (a complex organism composed of several parts) that does not identify it with one of its components, but with the system itself. The “morphic field”, responsible for the organization, structure and shape of the system, would have its own memory, determined by the contribution of each member.

The book explains:
– how the past forms and behaviors of organisms determine those of similar organisms in the present through morphic resonance.
– non-material connections that allow direct communication through time and space.

Rupert Sheldrake proposes that morphogenetic fields are responsible for the characteristic shape and organization of systems in biology, chemistry and physics – and that they have measurable physical effects. Using his theory of morphic resonance, Sheldrake was able to reinterpret the regularities of nature as more similar to habits than to immutable laws, offering a new understanding of life and consciousness.

Sheldrake demonstrates that the past forms and behavior of organisms influence the organisms present through direct intangible connections through time and space. This may explain why new chemicals become easier to crystallize worldwide the more often their crystals have already formed, and why when laboratory rats learned to navigate a maze in one place, rats elsewhere appear learn it more easily. With over two decades of new research and data, Rupert Sheldrake provides an even stronger case for the validity of formative causality theory that can radically transform the way we see our world and our future.

The three basic principles of the Formal Causality hypothesis:

1 – Morphogenetic fields are a field that until now has not been recognised and taken into consideration by physics and cannot be understood through classical mechanistic conceptions, but require absolutely new concepts.

2 – Organisms evolve. They have a history and, thanks to a process called morphic resonance, they contain within them a memory. Each individual belonging to a species draws on the collective memory of the species and tunes in to its past members, in turn contributing to the further development of the species itself.

3 – Morphic fields are memories of influence within space-time, located in and around the systems they organize and structure with their information.

The basic function of morphic fields is to impose an order on the indeterminism of the systems that preside over them: they work at a subatomic level, acting as programmed and schematic restrictions on the multitude of probable events. Morphic fields guide systems towards specific objectives, which represent the limits towards which a dynamic system is attracted (what Renè Thom in his chaos and catastrophe theory calls “attractors”).

Rupert Sheldrake is a biologist and author of more than 85 scientific papers and 9 books, and the co-author of 6 books. He was among the top 100 Global Thought Leaders for 2013, as ranked by the Duttweiler Institute, Zurich, Switzerland’s leading think tank. On ResearchGate, the largest scientific and academic online network, his RG score of 33.5 puts him among the top 7.5% of researchers, based on citations of his peer-reviewed publications.

He studied natural sciences at Cambridge University, where he was a Scholar of Clare College, took a double first class honours degree and was awarded the University Botany Prize (1963). He then studied philosophy and history of science at Harvard University, where he was a Frank Knox Fellow (1963-64), before returning to Cambridge, where he took a Ph.D. in biochemistry (1967). He was a Fellow of Clare College, Cambridge (1967-73), where he was Director of Studies in biochemistry and cell biology. As the Rosenheim Research Fellow of the Royal Society (1970-73), he carried out research on the development of plants and the ageing of cells in the Department of Biochemistry at Cambridge University. While at Cambridge, together with Philip Rubery, he discovered the mechanism of polar auxin transport, the process by which the plant hormone auxin is carried from the shoots towards the roots.

Strategic thinking requires the ability to contemplate possibilities that are not yet present.
Rupert Sheldrake
Share this post